To understand where a DesignSystem  of an organisation stands in context of implementing a DesOps, first step is to evaluate the existing DesignSystem that is in place and contributes to the organisation’s design process. (We will explore the process aspect in details, in later articles in this series.) To evaluate any DesignSystems  in a broadway we can easily form a metrics that takes care of the following two perspectives on the system.

Typically the Design Systems can be broadly categorised into 3 types, namely: Static, Dynamic and Generative :

Static: Most of the attributes and elements that make this system is mostly static in nature. For example in a Static type Design System, the style guide may be pre-defined print ready reference, defining basic color standards and typography etc. The user has to read through and manually refer it to decide those related attributes in his work. This kind of System mainly prescribes guidelines, rules, principles which does not automatically change or created in a dynamic way either in the stages of creation or implementation by the developers etc. Typical organisational style guides or UI pattern documentations where the system describes how and where to use the patterns with some sample code to refer are falling under this kind of categories.

Dynamic: This kind of Design Ssystem  have the content as well as the principles of implementations are designed and developed in a way that can be directly used in the code. The creation and implementation of the content are dynamic and mostly geared towards the actual elements that can directly be used in the code. This kind of Design System  is more than a reference system for the developer, rather as a part of the actual build of the actual products developed as a part of it. Most easily noticeable traits of this kind of design system  is that some special purpose frameworks, code libraries are part of it, which integrate into the actual builds of the products.

Generative: Generative Design System  are the ones, which generate the actual build ready outputs that can directly go into the build of the product. For example, instead of a static style guide, a generative Design System  can have the tool that will generate dev-ready HTML, CSS and JavaScript based output from the designer/developer inputs. The output of such system, take care of the context for which the design outputs is needed. Let’s say if the developer needs to build a cross-platform hybrid app, hen such system can generate the code that will take care of the scenarios for the interaction and behaviour for all target device resolutions, screen density as well as the behaviour for native wrappers as well as in-browser functionalities and restrictions. We will again journey into the details of the Generative Design Systems shortly.

Low Maturity: When the Design System has a low maturity, it mostly depends on the static attributes that we discussed above. The creation and maintenance of different attributes are mostly the result of manual effort and the most interesting point about this is that the designer and developers have the cognitive load to refer and comprehend and take decisions on what to use and not use in specific context of their work or product. It is also important, there may be some attributes which might have dynamic attributes , but most of them are out of the transition that the design system is having due to its evolution,

Medium Maturity: In the Design Systems with medium maturity, the most elements and attributes are mainly dynamic in nature. These systems mostly depend on the frameworks, libraries etc. There may be some overlaps in static and well as generative attributes.

High Maturity: Similarly in Higher maturity, apart from the fact that it mostly contains generative attributes, it involves the aspects of automation, computer-vision and may deploy artificial intelligence (AI) to provide continuous pipelines that aspires to remove the human intervention form the process blocks. On ground reality it might require the human intervention to feed in the creative juices or decision power that impacts critical human needs or contexts.

When we map these 2 perspectives horizontally and vertically, we get the the right insight into the DesignSystem’s position in the graph that allows us to clearly understand where the gaps are for the DesignSystem to evolve on which dimensions. 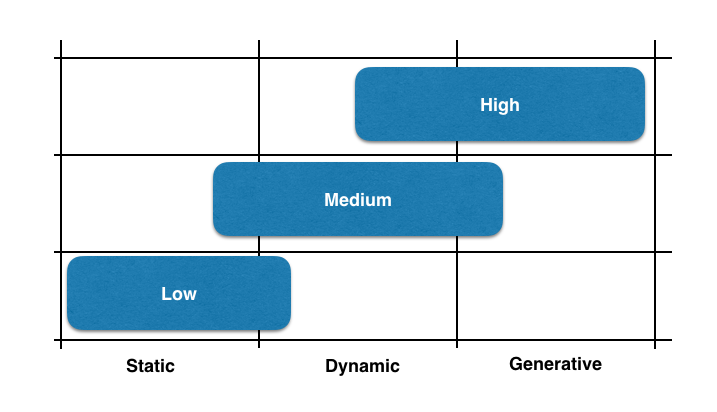 Note that the metrics that govern the success of a DesOps implementation is almost synonymous to this metrics we explored about Design Systems. The factors that adds to this metric on Design Systems,  includes aspect where we measure how impactful the Design System is in touching the different design process lifecycle blocks where each role like an Information Architect or an Interaction Designer , Visual Designer or even the Developer are attached to, in the delivery track. This aspect is more figuratively termed as a Living Design System.

The scaling of design is a classic issue. Moreover in recent times the explosive growth of technology across different devices, platforms and ecosystems, it became an ever-growing monster that every designer faces sooner or later. Native (Windows, Android, iOS, Linux etc. ) Web (HTML, HTML5, CSS, CSS3, JavaScript and frameworks etc. ) Along with the combination – the Hybrid – make the scaling of the design language an unending challenge.

The Salesforce design team tried to solve the challenges of applying similar designs across cross-platform product families by introducing a dynamically configurable design asset system which viewed the individual entities of any design system as design tokens.

Technically it was a single JSON file that was the “Single Source of Truth” that contained a set of name-value pairs that defined the properties and their relationships under different categories like text colours, backgrounds, border sizes, font sizes, etc. This JSON was consumed by the framework (i.e. The Lightning Designing System link: https://www.lightningdesignsystem.com/downloads/) developed and templatized for different target platforms, devices, Operating Systems etc. The Lightning Designing System framework generated different formatted outputs for CSS via common CSS preprocessors like Sass, Less and Stylus. Also there was an output in XML format that is supported in Android and JSON for iOS specific development. The Salesforce Design Tokens open-sourced at https://github.com/salesforce-ux/design-system.

The second interesting aspect of this was the use of GitHub to host the design system. Unlike the design system of traditional organisation, where the design system was hosted as downloadable form (even in the cases where the version control like Git is used) these have to be either translated into desired formats for the target platform or hosted especially along with the code. But here the design tokens representing the styles definition and the properties, as hosted on GitHub, were directly integrated into the build process contributing to the Continuous Integration and Development approach of development. In this sense, it was more as a Living System acting a single source of truth, from which the required branch is pulled and be made as a part of the build.

Many other pattern library and/design systems like RedHat’s PatternFlyhttp://www.patternfly.org is also available in similar approach at GitHub (i.e. at https://github.com/patternfly )as that of this second aspect we discussed now. But the idea of making the style guide being available as a single source of truth in a combination of this second aspect is what makes the case of the Salesforce design system unique among similar attempts for an approach to delivering a consistent design across different platforms.

One thought on “The Maturity of Design Systems”