(This article was originally published on February 9, 2015 at https://www.linkedin.com/pulse/what-failure-google-glass-teaches-ux-samir-dash/ )

In mid of January I saw the headlines making official announcement of the death of Google Glass. I was not surprised. I knew lot of issues ave to be addressed before Gass could make it to the expectations. Many of them are issues related to UX. All of them related to an grey area of UX space, which was never given the prime consideration when designing a seminal product like Glass and many other legends.
Back in 2013, I had wrote a few posts on the usability in context to the social aspect of Google Glass that was being ignored. When I read now the article saying “privacy concerns” is one of many reasons of failure, it certainly louds the many of the design approach concerns I had raised.

Google Glass is not evil product, everyone agrees. Even all agree that it has immense potential. However, it certainly needs a facelift from product design point of view — and there by from UX point of view.

We saw, the raise and fall of Google Glass carrying it’s pattern where we can notice how with the emergence of Google Glass, the topics related to devices infringing with personal privacy became hot cakes for tech-debates. Many social scientists, human rights activists had started to see the ‘Glass’ as the evil that reminds them with George Orwell’s ‘1984’. The fear of a ‘Google Big Brother’ controlling the major shares of the information world is seen as the intruder to private aspects of ‘the public’. The “Glass Hole” incarnation of the Glass is equally seminal as the product “Glass” it self, due to bring out the topics like “user privacy”, “social context” and certainly what I believe as the “Context of the Other”.

It is not the case that Google has not spent money on user research and usability aspects before going ahead with the concept of persons using glass that may change the way we interact with systems in our daily life. Usability wise, it is definitely a super gadget that has the potential to catapult the device industry into next century. But the new features and interaction methods implemented in the device in a manner that is actually a decade old approach that is only fit for human-computer-interaction (HCI) in case of smart phones and tablets which have less tendency to hurt sentiments of those who do not directly interact with the device when the user might be performing some actions in a certain socio-cultural context. These sentiments could result in the fear of losing privacy , cultural distrust and humiliation among the second-hand users of the device who are impacted indirectly in some way by the device actions in the context.

Historically, the product design process while following the check and balances with heuristics and usability models, has never given prime importance to the user’s relationship to the ‘Other’ in his environment. And this is the missing piece that needs to be re-discovered and fit into standard usability matrix when Google might give “Glass” a face-lift to bring it back with a new incarnation that is more friendly and less intruder to user’s privacy and is compatible with SX model (Socio-cultural Usability Model) which I had proposed earlier. 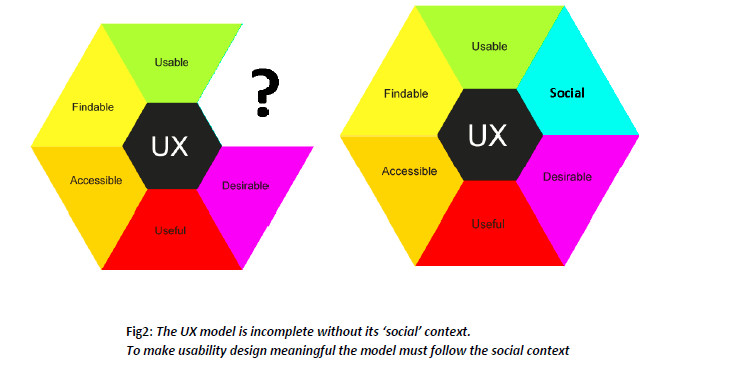 ‘Socio-Cultural User Experience to represent the aspect of Usability Design or User Experience (UX) that deals with usability aspect of products/ software in a social context. This is the same “Context of Other”

Considering the ‘Others’ in the User’s Social circle:

The existing UX model does not analyze the need beyond the current user and his ‘type’ to do a usability test — it never considers how it is impacting the other members of the society while the target user set is using the app/system.
For example, using car horn is a safety measure, but using it near a hospital or school is considered as unsocial and disturbing. There are many social check points that bar users of any system from using it in special socio logical context.

Criteria of a sound usability design of an app on socio-cultural context:

1. Universal—has design elements that are universal.
2. Ethical – follows principles and approach that has positive ethical value
3. Non-racial – non biased and non-provocative attitude to user’s race and beliefs.
Socio-cultural User Experience (SX) and Social Interaction Design (SxD)
4. Respectful – towards user’s culture, social beliefs and ethnicity
5. Safety – has it’s social impact that is safe for the User.
6. Non-abusive – must not exploit the user and the environment he is in .
7. Common Sense – has geared towards common sense – behaves and reacts to the user in a sensible way
8. Protect Privacy – App’s feature and interaction must protect user’s privacy and other humans in the social circle.

Google Glass is designed in a way that can act as more personal than a mobile handset, as it is a spectacle and can be indispensable accessory for the user once he gets addicted to it by replacing his conventional glass with it.

But the support for camera to take picture can pose a problem for the user to enter private areas, industrial areas, secure zones and offices where cameras are not allowed. In some places of earth, the cultural restrictions are in practice to ban cameras in certain places — most of the temples in India do not allow cameras inside. Now imagine, if the user has replaced his traditional spectacle for it , then he may find it difficult to manage without it in these scenarios.
So by following SX approach in usability design, the glass will require to have a “detachable set of camera” used in the glass so that the user can detach the camera and which would power it off and at the same time allow the user to keep on using the glass as a conventional spectacle.
This example may be just one of many features that Google glass might have, but it is enough to illustrate the approach in thought.

Points to Focus on while designing a SxD Compatible System

Gesture and other Interaction Medium of SxD:

The ‘Social Interaction Design’ approach has the following major facets in the system interaction towards the user in socio-usability context:

1. Facial Gestures—The selection of Human triggered facial gestures (e.g. wink, smile etc.) to activate the system or trigger any action in the system must be judged based on the canonical meaning of those gestures in social and cultural context of the user where he is going to use it. For example, in case of Google Glass , the feature of “winking” (the gesture developed by Google Glass developer Mike DiGiovanni http://news.cnet.com/8301-1023_3-57582500-93/google-glass-code-lets-you-snap-a-photo-with-a-wink/ ) at someone to take a photo can pose a problem if the user is in India or Middle East countries. Even in western world winking at a lady or group of ladies (even though it is unintentional for any kind of abasement) can be taken as a negative action (e.g. weakness in character) and evoke anger and misunderstanding. So even if the winking to take a feature is a ‘cool feature’, in social context SxD will suggest the usability/interaction engineer to rethink on it to implement some options to ‘keep it disabled by default and allow the user the total freedom to use his judgment to enable and use the feature in any given socio-cultural context. Fig5: The ‘wink’ gesture developed by Google Glass developer Mike DiGiovann allows user to take a snap of the surrounding with just a wink of an eye.

2. Sound Gestures — The selection of sound gestures – the use of voice or sound pattern to control the system should be examined for different user environments. For example blowing a whistle to activate a play functionality on a portable music player, or to open an SMS on the cell phone can be an interesting feature, but on the other hand if it becomes useless in a busy street or in a meeting room where a discussion is going on.

3. Touch-based Gestures – Touch, swipe and pinch are popular now a days as most of the tablets and smartphones offer this as a user friendly interaction method for the user. More devices are coming up which do not have any physical button rather a few multi-touch gestures are enough to fully control them. However ‘SxD’ stresses that the devices must be designed and developed with the interaction method that can allow alternative to the available touch triggered interaction mechanism. For example , while developing a digital medical instrument with touch sensitive display, the interaction methods should be carefully planned so that the surgeon can use the system without touching to avoid infections through contact with it while conducting any mission critical surgery.

4. Hand/Finger based 3D gestures – ‘SxD’ approach encourages to conduct a social analysis of the hand/finger based gestures that are planned to be used in a system – the gestures should selected / innovated by carefully studying the cultural context avoiding common gestures used in daily life that are considered abusive to others. In addition to this practical usage resulting out of user’s environment and work culture must be given consideration. For example the middle finger gesture commonly used by youths to represent the crack humiliating pun on the other should not be used for any app that is expected to be popular among the users from the similar demography. But note that only considering the demography is not enough to decide the gestures.

5. Mouse /Keyboard Control – Similar to the gesture, voice and the related interaction method with system, mouse, keyboard, joystick and other typical input device based methods should be considered with in the context in which they are going to be used. As this group of interaction method are very old, many standard guidelines are already in there in practice. They However we need to rethink on them and make sure they are upto date with the ever-changing human –computer-interaction domain.

Our world needs products that are not only usable but also safe to use socially. It is high time, we need to consider the “Other” in our social context to improve the products and thereby our future.

One thought on “What the Failure of Google Glass Teaches About UX?”