… With recent software delivery processes, for example, the Agile process and Continuous Integration (CI) and Continuous Deployment (CD)of code, the DevOps approach provided a faster highway to ensure faster delivery with low risks. So the earlier SDLC model got redefined over time with Agile and then with DevOps to its current shape.

However, because design is an integral part of any product delivered, there is a need to ensure that gaps are bridged between the traditional design lifecycle and the fast track of the DevOps development lifecycle. DesOps and DevOps both are complementary to each other. The design delivery process improvements try to optimize the overall delivery process and thereby contribute to DevOps, for example, in aspects such as testing of the product that involves design aspects, usability, accessibility, etc.

The need for tighter integration between the design team and the engineering team became a necessity to ensure to design at scale. During the past two to three years, the top five big companies have made heavy investments in this area that have paved the way for other organizations and design communities to be more explorative in this area…

You can read a related article Translating Value at Different Stages of Design with Minimal Waste  here: http://desops.io/2018/05/12/translating-value-at-different-stages-of-design-with-minimal-waste/

DesignOps or DesOps is an approach to design, inspired by the culture of DevOps. In this article series, we will be touching upon the practical approaches on how to prepare for this next-wave in design that compliments DevOps in the concepts of a cultural shift, collaboration and automation. We will also see what are the available solutions today that contribute to bringing the full circle of design in the context of software development lifecycle.

In today’s world, while design as a discipline is getting more and more recognition across the entrepreneur world and many industry efforts like IBM Design Thinking and similar frameworks, trying to create a synergy between the Agile approach of SDLC and the Design Thinking. It is an interesting crossroad in time where the next big thing in product delivery is to bring scalability as well as automation to the creative process. In the context of the Software industry, I always see “Design” as an intersection between creativity and the technology where both shape each with the help from user-needs and blending of these results into successful products. Any typical software product delivered involves many complex as well as diverting technologies, processes, people and visions. Though mostly a software delivery happens with the team members decided in two major groups – developers and designers, ultimately the best outcome always depends on the fact that how these two teams communicate with each other and how efficiently the thoughts and ideas are shared, propagated and translated.

When it comes to product development, the amount of complexity and the variety of aspects starting from the diversified thinkings, technology, tools and processes that go into it, is significant. Attempts have been made over the period to improve various aspects of it ensure the delivery process can be optimised to scale upto the ever-expanding needs. In software and IT infrastructure industry, recently one such phenomenon was DevOps that focused on rethinking the development and operations to improve productivity and efficiency. DevOps started in the industry towards the last part of the first-decade post-millennium. Back in 2008, there was a fine separation between the roles who code and the roles who deploy them. Basically, the coders or the programmers were responsible with code generation while the infrastructure guys were looking after the process of deploying them.

Due to the rise of Agile process, this code generation and deployment as a part of delivery became more frequent and continuous unlike the age-old waterfall model, when it used to happen every 6 months or a year. In all major software services industry, it was common to have fixed calendar dates in the year that represented the release or deployments. The 2-3 weeks sprints of Agile approach made it obsolete in many. As the continuous delivery became the defacto standard, this narrowed down the gap between the development team and infrastructure team. This also gave rise to the need of multidisciplinary roles or individuals who can bridge the gap between the production environment and the development server, allowing their code to be deployed in a more efficient way and faster. As the DevOps took shape, the practices around it grew from a few talented hackers to a profession with a culture of its own involving its own set of tools, practices, technologies and workflows which became the norm in the industry today.

Most of the DevOps today focuses on the process blocks mostly impacted Engineering or technical aspects of the product rather than the design aspect. To bridge that gap, in recent times many attempts are being made to define a consistent approach called DesOps. The DesOps or DesignOps is a relatively new term. Many, to comprehend better, refer to DevOps, which has the prominent similar underlying philosophies and goals. Design operations (aka DesignOps ) is though relatively new concept yet is a growing area of concern for design teams seeking to help their teams increase the value they produce for their host organizations and that organization’s customers. The term and the practices exist inconsistently in many attempts made by different organisations since many years.

Even when we try to implement a DevOps geared process to run a Design driven process model, still the actual challenges, the gaps between the design and development or the design and testing blocks are not fixed. So without implementing a DesOps or DesignOpsto fix the design and other endpoint blocks in the process, the implementation of DevOps will never yield the desired outcome and will not be able to sustain the core philosophies behind it. 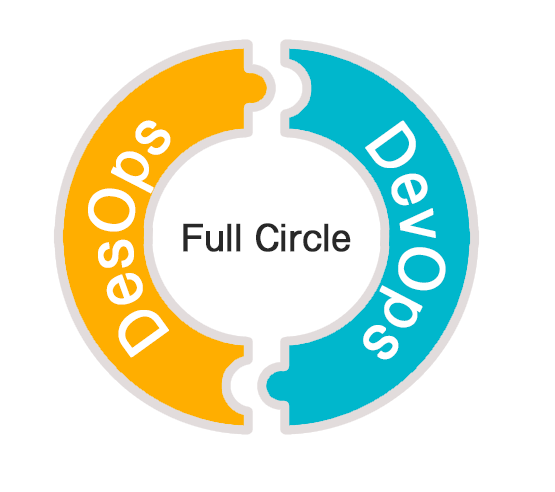 DesOps and DevOps both are complementary to each other. The Design delivery process improvements try to optimise the overall delivery process and thereby contributing to the DevOps. For example the aspects such as testing of the product that involves design aspects, usability, accessibility etc. In the testing phase needs some benchmark to referee to that can only come from a process where the DesOps has implemented that outputs and feeds the benchmark to the DevOps phase where the testing block can use it. In addition to this when we are in Agile or iterative and continuous process models, at each sprint cycle the end to end flow is executed and thereby making the Continous Integration(CI) and Continous Delivery (CD) truly meaningful.

DesOps, was primarily born out of the primary need of how to design at scale. The factors that shaped it are of similar nature that shaped DevOps. With the new age software delivery in recent times, with the Agile process and Continuous Integration and Deployment of code, the DevOps approach provided a faster highway to ensure faster delivery with low risks. So the earlier SDLC model got redefined over the period with Agile and Then the DevOps to its current shape.

However, as the design was an integral part of any product delivered, the necessity to ensure the gaps between traditional design life cycle working along with the fast track of development life cycle using DevOps are bridged. The need for tighter integration between the design team and the engineering team became a necessity to ensure to design at scale. During recent two-three years, the top five big companies heavy investments into this area pave the way for other organisations and design communities to be more explorative in this area. The implications of DesOps is reflected in the outcome, where the silos among the teams and disciplines get reduced. Along with this, it improves the collaboration among cross-functional team and working practices, that contributes to minimising wastage in the delivery process.

Keep tuned in… next, we will start explorations with the basic blocks for DesOps – i.e. the Design Systems.

[This was originally first published onMarch 26, 2018 on Linkedin at https://www.linkedin.com/pulse/desops-next-wave-design-part-1-samir-dash/]