[This is the first part of the half-day workshop titled “Applying DesOps in Your Enterprise” I conducted at the “UX India Conference 2018” on 4th October, 2018, Bengaluru. This part focused on ‘Process’ aspect of DesOps, and tried to address the challenges of bringing the designers to the same page to that of diversified subject-matter experts (SMEs) during the ideation phase of an Design Thinking workshop, by collaborating on “Petal Process Diagram”(PPD) . PPD is a mind-mapping kind of activity with the focus to involve all the entities involved in and around a touch-point in a feedback-loop, and helps everyone in the room to be on the same page on the potential possibilities, feasibilities involving “props” and “process” components.

You can explore more at http://desops.io/2018/10/03/workshop-at-ux-india-international-conference-2018-applying-desops-in-your-enterprise/ ]

Continue to the next part of the workshop, in the next post.

Meanwhile, you can explore more here:

(c) Samir Dash, 2018. All rights reserved. This content including the images are licensed under a Creative Commons Attribution 4.0 International license

Infographic: The Full-stack Roles in DesOps : DesOps.io from Samir Dash

Typically the phrase “full-stack” (or full-stack developer) refers to someone who is someone comfortable and could single-handedly tackle every layer of software development. Typically DevOps engineers and full-stack developers share the same philosophical traits — they strive for greater agility and flexibility and hint at a trend towards greater generalization in the skillset of technical professionals. In case of the full-stack designer, he grows into a cross-disciplinary professional who can handle across Interaction Design, Visual Design as well as UI Development or prototyping. This helps to reduce the gaps between the outputs from these different and the effort that goes into the translation of concept flowing from one stage to another, where there are many roles assigned to more than one persons are involved (And remember that one of the key principles of DesOps is to remove waste by applying practices like Lean models).

(This article was originally published onApril 29, 2018 Linkedin Blog at https://www.linkedin.com/pulse/desops-next-wave-design-part-10-whenif-tool-capture-samir-dash/

As I mentioned in the previous article, the assumptions or the hypothesis can be made as a formalized statement of “if …. then” or “when … then” kind of format. To use ensure that this is captured correctly during collaborative sessions and within the design team, I have been using the same and some variation of the same format as a tool which I call “When/If – Then” Tool. This is a simple tool that can be very effective during collaborative sessions, to capture the assumptions that form the basis of why we believe that how the certain aspect of user pain-points and user needs should be translated into solutions using specific aspects.

Basically, this tool was helpful than the traditional elaborative templates to capture assumptions, as it was straightforward and can be used with a minimal explanation to a cross-functional crowd, a large portion of such population may not be accustomed towards the use the typical Tools and methodologies. The “When/If – Then” Tool is synonymous with the typical cause-and-effect kind of flow that is understood by and large and required very minimal explanation, and can be like any other UCD tools, can be constructed using simple post-its or printed formats.

Here is a post-it version of a barebone “When/If – Then” Tool: 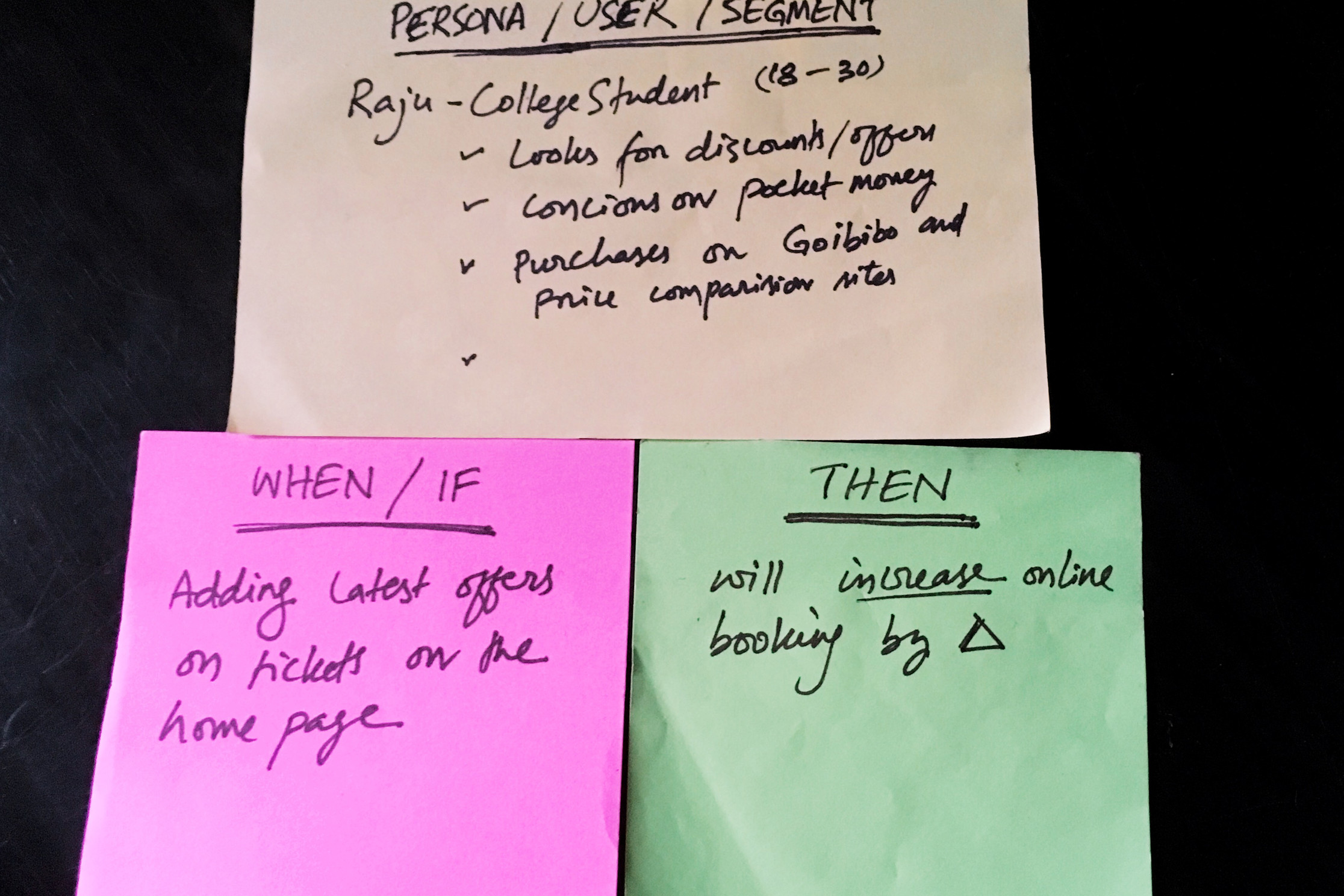 Following is the basic format of this tool that has primarily 3 boxes — the left hand spanning column represents the persona or the target user (even segment given a larger scope from the market perspective) whereas the right-hand side boxes represent “When” or “If” part of the assumption and the lower box “Then” forms the outcome aspect of the assumption or hypothesis. 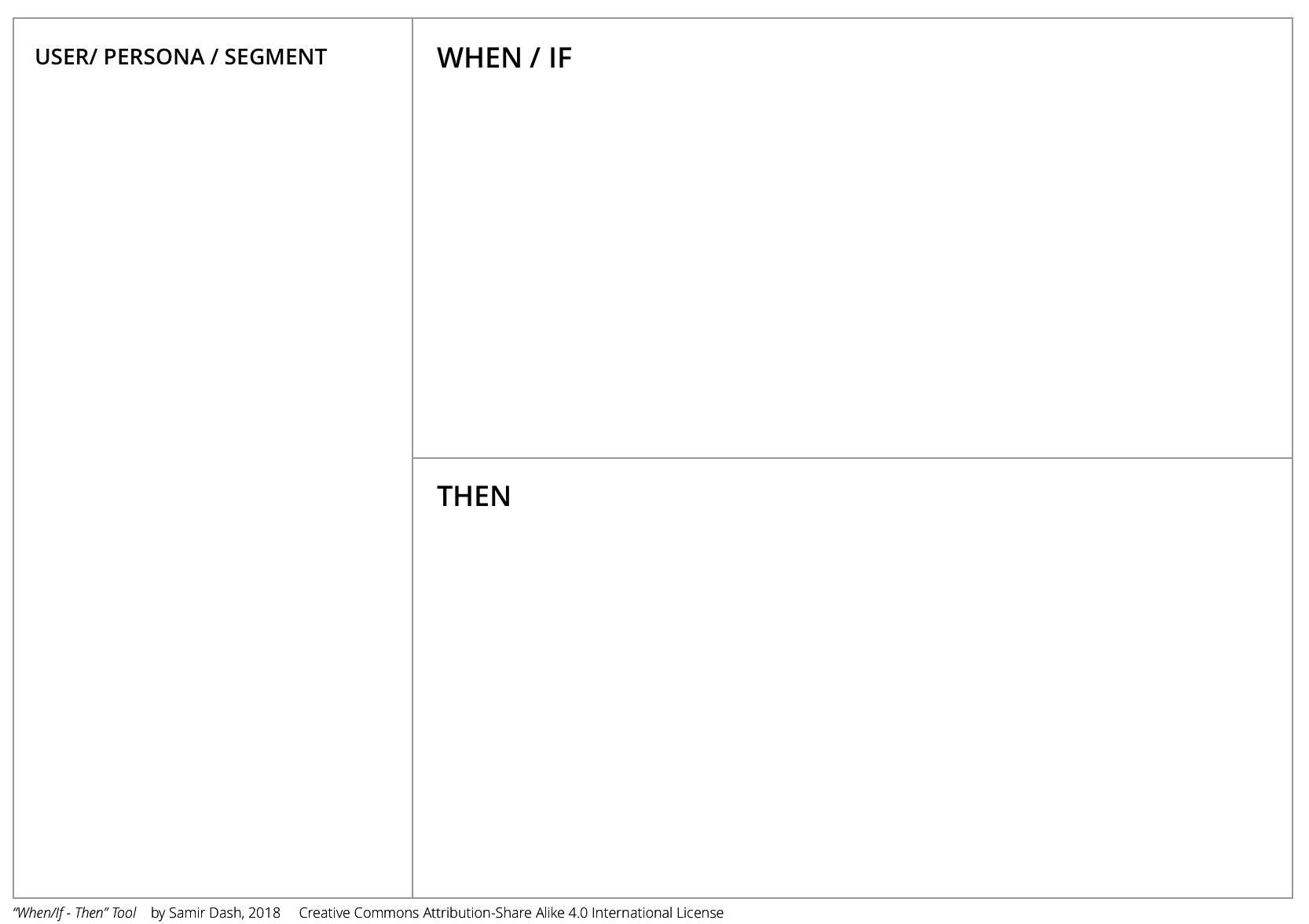 You can download a printable PDF of the template at http://desops.io/2018/05/07/when-if-then-tool-printable-version-for-a4-size-paper/

Basically, the above template helps you in completing an activity to frame your Hypothesis statement that are key to the the whole hypothesis-driven design (HDD) methodology. Now it is important that this tool can be applied to two-part blocks that can be used seeing as what you assumed versus what outcome have you got throughout experimentation.

A friend of mine asked me a valid question that it is fair to assume that HDD based approach as informs the assumption as a part of the course correction, whether it would replace the research from the process? My view on this is that the research (in the traditional definition like user and market research etc. ) has a key role in the process, as it is a mechanism to inform the stakeholder to create a vision. Technically a vision, itself is a set of hypotheses formulated by the stakeholder or the product manager. So it has a unique role in the process at the beginning of each cycle of the iterative process (let’s say to contribute to new requirements that flows down from the vision) and will stay. However, the hypothesis-driven design (HDD) helps in making a formalized approach and adds a mechanism to ensure the feedback-loop that informs these research or chunks-of-research that happens along the way in a structured and non-ambiguous way that enriches the research involving the additional validation process with evidence. Which acts as a catalyst to improve the efficiency of the research in a positive way. So essentially research is happening organically throughout the process in an on-going manner.

In the next article of the series, I will continue the exploration on the same topics. Keep in touch.